WHAT IS DYSPORT®(abobotulinumtoxinA) FOR INJECTION?

On the market for 10 years, Dysport is an FDA-approved injectable treatment for the temporary improvement of the appearance of moderate to severe frown lines (glabellar lines) between the eyebrows in adults less than 65 years of age. Dysport is a neuromodulator, an injection of a small amount of botulinum toxin that treats frown lines when injected into underlying muscle, causing it to relax and gradually smooth out the appearance of the frown lines between the eyebrows. Frown lines are not just caused by aging, but from constant repetitive movements and muscle contractions, which means they can develop in younger adults too. If you’re starting to notice frown lines that are bothering you, it might be time to ask your specialist about Dysport.

WHAT CAN I EXPECT DURING MY TREATMENT?

Dysport is a quick (10-20 minute) procedure with minimal downtime, using a relatively small needle. During treatment, you will receive an injection into each of the five points between and over the eyebrows, two injection points above each eyebrow in the corrugator muscle and one injection point between the eyebrows in the procerus muscle. Ask your specialist about any precautions you should take after treatment. The most common side effects to be aware of after treatment are nose and throat irritation, headache, injection site pain and skin reaction, upper respiratory tract infection, eyelid swelling, sinus inflammation and nausea.

WHAT RESULTS WILL I SEE?

In Dysport clinical studies, more than half of users saw an improvement in their frown lines in just 2-3 days. Don’t be afraid of a frozen look! Rather than freezing the treated area, Dysport relaxes the muscles that make you look angry or sad to provide natural-looking results. 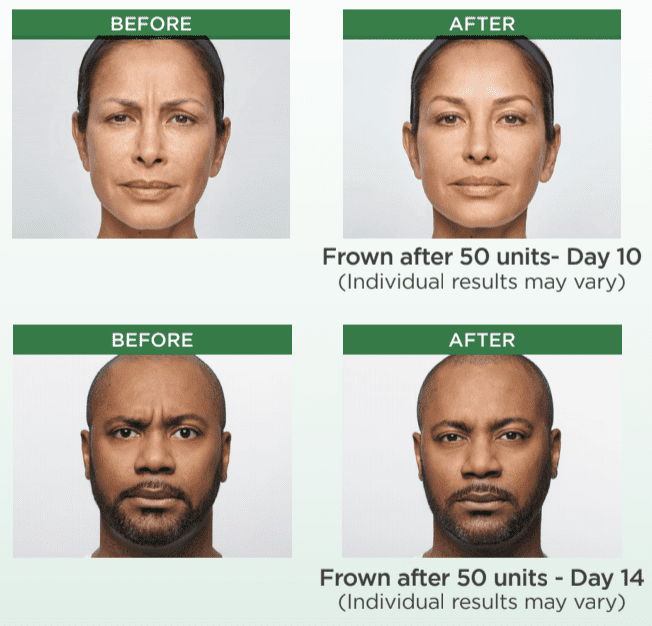 If you love your new look, talk to your specialist to develop a treatment schedule. As with any botulinum toxin product, you need to wait at least three months between treatments, and results may last up to five months. Don’t be surprised if you’re still loving your look at your next appointment -- even four months after Dysport treatment, users reported looking at least four years younger than they did before their treatment. In fact, 97 percent of users who tried Dysport reported that they would receive the treatment again.